The small Austrian village of Fucking will get rid of the unfortunate name that has seen a brisk tourism trade and frequent thefts of the town sign, the town council announced Thursday.

Mayor Andrea Holzner told Austrian broadcaster Oe24 that the name would be changed to Fugging from January 1, 2021.

The small community in Upper Austria of around 100 people has been pushing for a name change for years, the German Press Agency reported.

The name of the town, which lies north of Salzburg near the German border, has no meaning in German. 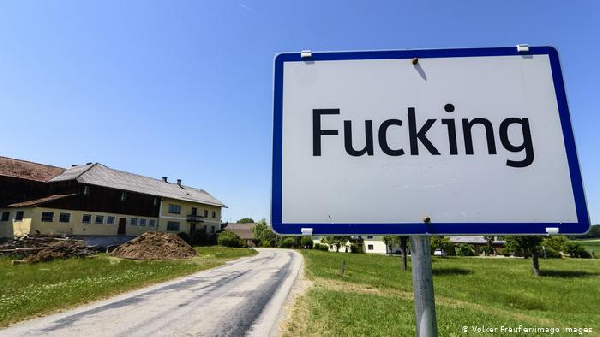 Locals have grown frustrated by the thefts of the town signs by tourists and of people photographing the sign.

Activists use ‘Fucking’ for good

The small village largely escaped the notice of the wider world until the birth of the internet, when it was frequently included on lists of the funniest or most explicit place names.

Last year, some local residents used the unusual name to help in their activism, for example, by putting signs above and below the sign to read a message like “Our climate is — Fucking — important!”

Fugging apparently better reflects the pronunciation of the town by locals. It is unclear what will happen to the current town signs.

No news has yet emerged about possible name changes to the nearby hamlets of Oberfucking and Unterfucking.

The town has been known as Fucking for around 1,000 years.